As shown in the LPL Chart of the Day, since 1952, with surprising regularity, US voters have given each party a second term in the White House to complete its legislative agenda. With equal regularity, they have flipped the party in the White House after eight years, resetting the balance of power in our two-party system.

“For all the talk of partisanship, voters seem to have chosen a kind of slow moving balancing act for more than 60 years,” said LPL Research Chief Market Strategist Ryan Detrick. “It’s almost as if they’ve seen worthwhile ideas in both parties, but have also rejected both parties when an extended stay in the White House might have led to those ideas being taken too far.” 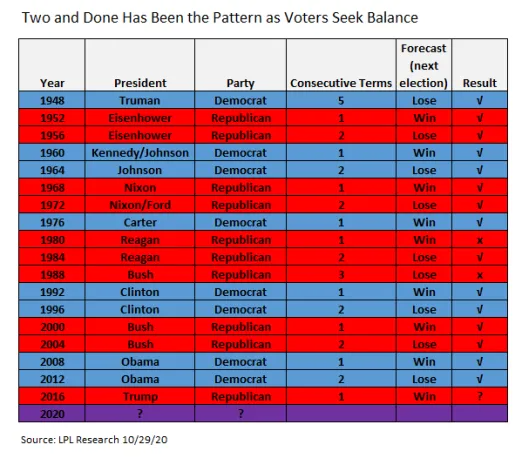 The apparent pattern is really very simple. You get eight years to execute your agenda, so each party gets a second term. But once a party has been in the oval office for two terms, voters seek to reestablish balance. While the pattern did not work very well before 1952, with Democratic Presidents Franklin D. Roosevelt and Harry Truman holding the White House for five consecutive terms, since then it’s been right in 15 of 17 elections, or 88% of the time. President Jimmy Carter’s loss in 1980 and President George H.W. Bush’s win in 1988 were the only outliers.

While it is a little naïve to say presidential election outcomes are simply due to the electorate seeking balance, there still seems to be something to it. Perhaps voters wanted President Barack Obama’s steady hand coming out of the financial crisis in 2008, but after eight years they thought the pendulum had swung too far and it was time to put an emphasis on a more pro-business approach emphasizing deregulation and lower taxes—an overly simple story but certainly part of what had happened.

As Americans, we are a pragmatic nation. We always have been. It doesn’t mean we reject ideas or don’t seek new ways to pursue our democratic vision. But it does mean that we at least collectively understand that any idea taken too far starts to detach itself from what it was intended to accomplish in the first place.

What does the pattern say about 2020? The forecast would be for a second term for President Donald Trump so that he has a chance to follow through on his policy initiatives. But if former Vice President Joe Biden should win, the American people might be saying the pendulum had swung too far too fast in a single term and it was time to seek balance. But either way, it only works because people go and vote, so whatever your perspective, we encourage you to vote and add your own wisdom to our 2020 election outcome.

This material is for general information only and is not intended to provide specific advice or recommendations for any individual. There is no assurance that the views or strategies discussed are suitable for all investors or will yield positive outcomes. Investing involves risks including possible loss of principal. Any economic forecasts set forth may not develop as predicted and are subject to change.

References to markets, asset classes, and sectors are generally regarding the corresponding market index. Indexes are unmanaged statistical composites and cannot be invested into directly. Index performance is not indicative of the performance of any investment and do not reflect fees, expenses, or sales charges. All performance referenced is historical and is no guarantee of future results.

Any company names noted herein are for educational purposes only and not an indication of trading intent or a solicitation of their products or services. LPL Financial doesn’t provide research on individual equities. All information is believed to be from reliable sources; however, LPL Financial makes no representation as to its completeness or accuracy.

All index and market data from FactSet and MarketWatch.

This Research material was prepared by LPL Financial, LLC.

Insurance products are offered through LPL or its licensed affiliates.  To the extent you are receiving investment advice from a separately registered independent investment advisor that is not an LPL affiliate, please note LPL makes no representation with respect to such entity.